Explore the countryside around Viandante del Cielo, and it's clear that Umbria fully merits its reputation of ‘the green heart of Italy’. Parks and woodlands abound, and agriculture is still deeply inscribed on the landscape, with a focus on traditional crops – tobacco, cereals, olives and vines, these last occupying some 13,000 Ha/32,000 acres in the region.

Umbria's wines may not enjoy the international renown of those from neighbouring Tuscany, but they're a secret waiting to be discovered. Umbria takes pride in its local grape varieties – varieties which have been cultivated across the region's gentle slopes for centuries, perhaps millennia, and which have been re-evaluated and relaunched in recent years.

This is also a territory which lends itself remarkably to international varieties, with its continental climate and soils that tend to concentrate characterful tannins. Add to this the perfect nurturing micro-climate around Lake Trasimeno, and the unique aspect of the south-facing hills where our vineyards are situated: all-in-all, it's the perfect backdrop for our Viandante del Cielo adventure. 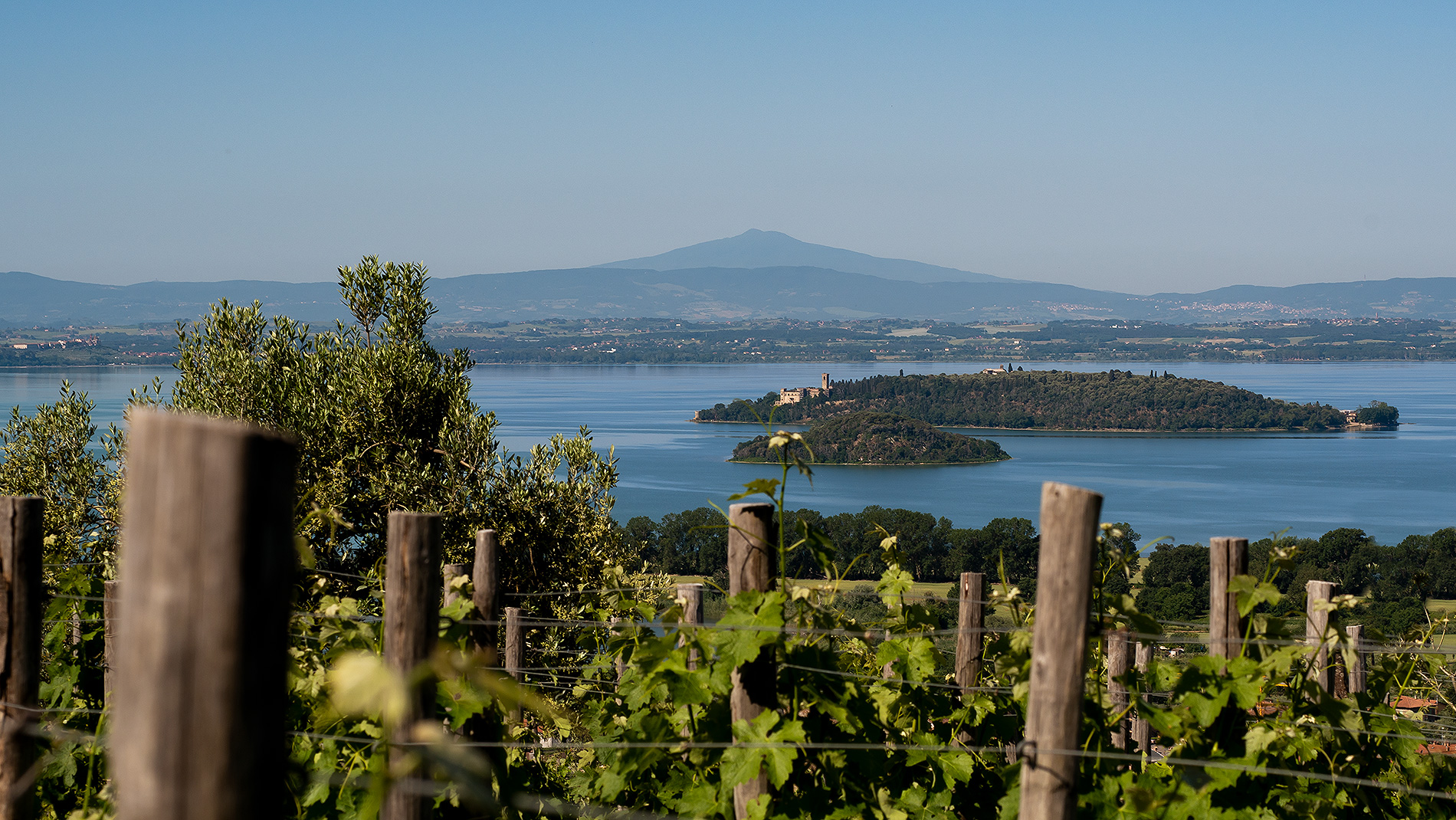 The landscape around Lake Trasimeno is a very particular ecozone. With a surface area of 124 km2 (48 square miles), Trasimeno is Italy's fourth-largest lake, and its vast surface of relatively shallow water (the maximum depth is less than six metres/20ft) helps to mitigate extremes of temperature, cooling by day and acting as a gentle storage heater at night. The lake also helps to keep moisture levels high, even in the hottest months, when rainfall in the lake basin is significantly higher than the average for this part of Umbria.

These conditions apply in particular on the lake’s northern shore, where the little town of Passignano sul Trasimeno and Viandante del Cielo are situated. Our 24-hectare (60-acre) estate comprises four hectares (10 acres) of vines, planted along narrow, contour-hugging terraces on a lake-facing spur which ranges in altitude from 330 to 370 metres (1080-1210 feet) above sea level. It's a self-contained, exclusive outcrop – a private fiefdom facing south to south-west for maximum solar exposure, cooled by the gentle evening breezes that rise from the lake to take the sting out of any excess daytime heat.

The roots of the vines sink into soil which is a mix of lacustrine clay deposits from the Pleistocene, and sandstone and marls from the Oligocene-Miocene periods. Shards of calcareous rock give the terrain particular character, providing that element of stress which lends wines depth and character.

The spread of soil types found on the Viandante del Cielo estate is a winemaker’s delight: it is this, more than any other factor, that has allowed us to follow our dream of planting a diverse range of native and international grape varieties to produce truly original, exceptional wines.

The vineyards of Viandante del Cielo are planted on a very special stretch of Lake Trasimeno's northern shore – a spur of sloping hillside which, like a French monopole, is entirely within the confines of the estate. The vine rows wend their way along terraces laid out centuries ago by the monks that once lived, worshipped and farmed here.

Then as now, olive trees planted on the edge of many of the stony terraces ensure soil stability; they also help to protect the vine rows from strong winds and increase disease resistance. Today, permaculture has made interplanting topical once more, but such crop mixes, known locally as coltura promiscua, have long been a feature of traditional Umbrian agriculture. And there’s another benefit too: the olives make a very fine cold-pressed extra-virgin olive oil.

Tradition also guides us in our work in the vineyards where a handful of dedicated workers use age-old know-how to ensure a perfect crop. Vines are pruned, tended and harvested by hand. The vineyard is certified organic, so no systemic chemicals are used: sustainability and the utmost respect for the environment come naturally to us at Viandante del Cielo. Native flora grows in grassy swathes between the vine rows: as well as contributing to soil stability and health, this encourages competition for water resources (grapes, like children, should not be spoiled!).

The vine terraces rise from 330 to 370 metres above sea level (1080-1210 feet). Award-winning enologist-agronomists Maurizio Castelli and Mery Ferrara – both of them respected specialists with decades of experience in central Italy and further afield – devised a vine planting scheme that took account of altitude, aspect, soil type and other factors.

The vine rows follow the contours of our lake-facing spur of land, with the harsher, more compact higher slopes reserved for Cabernet Sauvignon, while Merlot and the native grape varieties occupy the lower slopes with their alluvial soil. The white grape varieties, Chardonnay and Grechetto, nestle in a sheltered site in the lee of the hilltop convent.

Vines are planted at an unusually high density of 10,000 vines/Ha, which increases healthy nutrient competition and strengthens root structure. But the grassy stretches between rows are so narrow, and access to these hillside patches is so challenging, that mechanisation of any type is well nigh impossible. Harvesting is carried out entirely by hand by a few trusted pickers, with the harvest stretching over as much as a month or more depending on climatic conditions, grape variety, aspect and altitude. 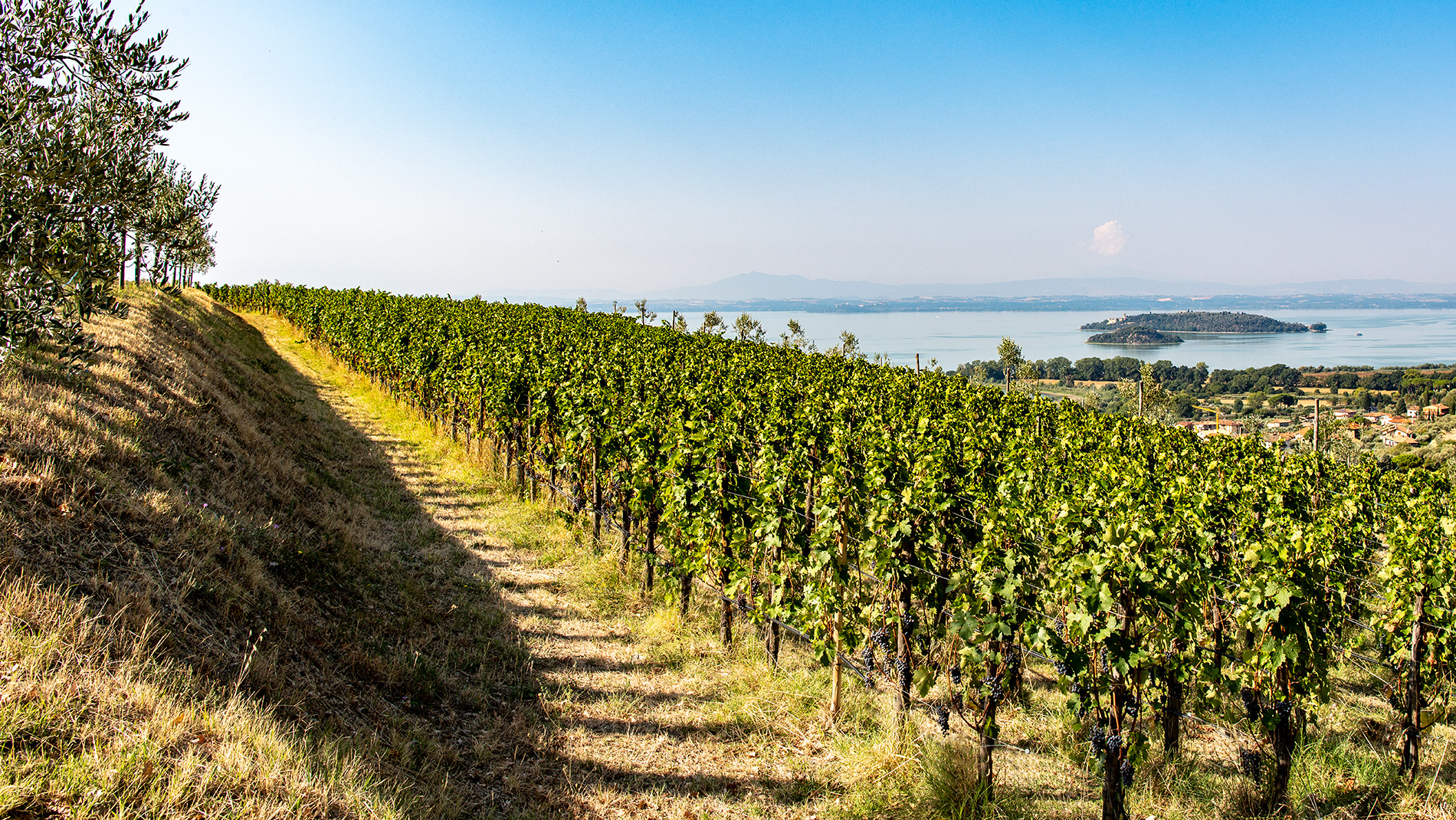 Our only concession to modernity in the vineyards is a specially modified Gaier tractor, slimmed down just for Viandante del Cielo, which carries crates of fruit from terrace to cellar, on the journey to becoming one of our exquisite vintages.

To move forward, Viandante del Cielo has gone back to age-old vines and rural know-how. But today, traditional isn’t enough.

Winemaking techniques have come on in leaps and bounds in recent decades, and at Viandante del Cielo lessons from the past and cutting-edge methodology merge in the vineyard as they do in the cellar, to produce grapes which express themselves to perfection during the alchemy of fermentation, blending and ageing. 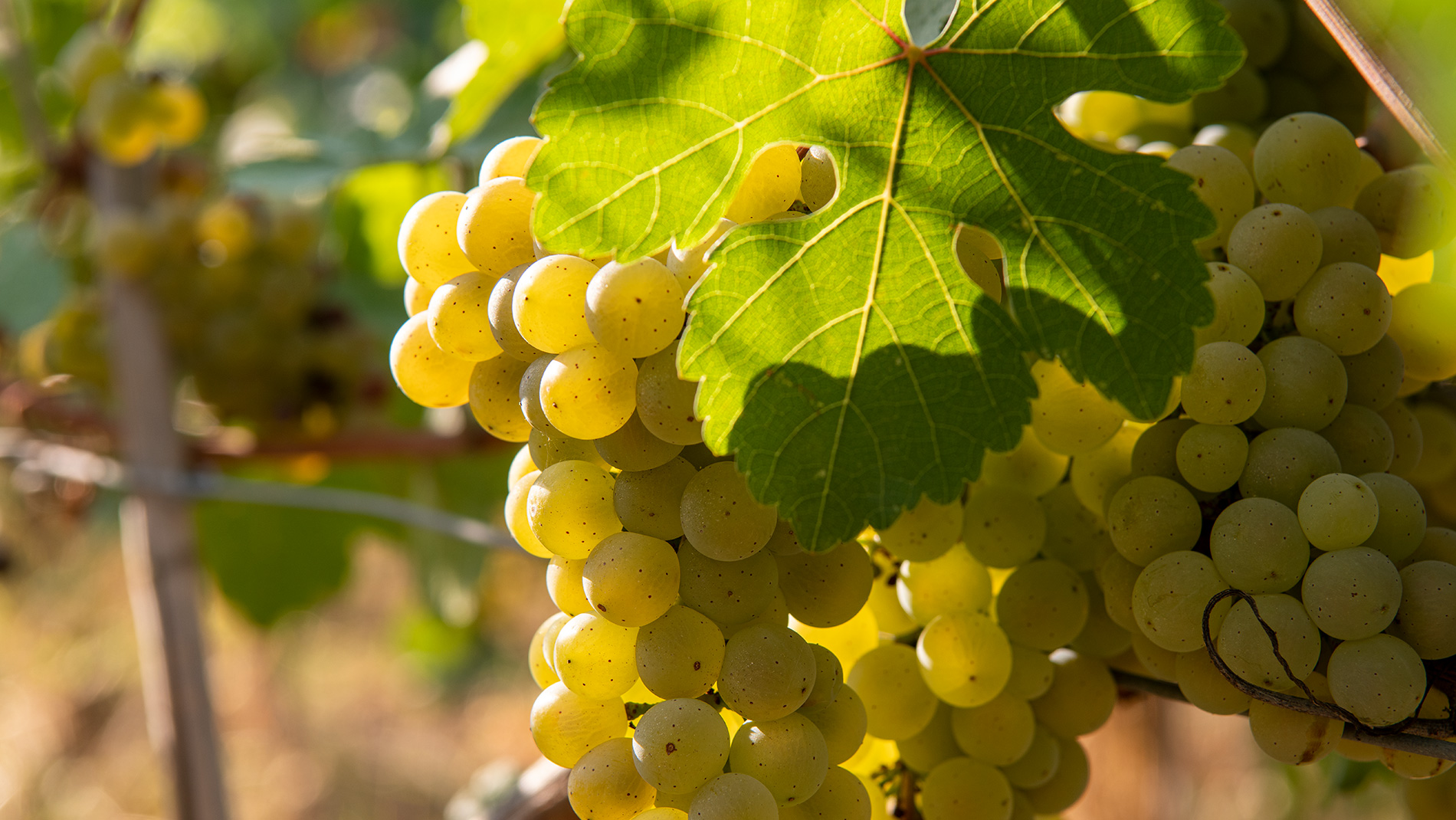 Vine tending and harvesting at Viandante del Cielo are a job for mind, hand and eye: row by row, leaf by leaf, bunch by bunch.

Like the olive trees, which a yield-obsessed winery would likely have removed, this natural field cover guarantees biodiversity and robust competition for water and nutrients. Viandante del Cielo is a certified organic winery, fully committed to a non-invasive, low-impact approach, convinced that healthy vines are those that grow in symbiosis with the rest of the natural world.

Cabernet Sauvignon was planted on the upper terraces of the estate’s south-facing spur. Lying immediately below the Convento dei Cappuccini, these terraces’ compact, well-drained sandstone soils – harsh and poor, in many respects – suit the variety well. Merlot, which responds well to damper soil conditions, found a natural home on the lower terraces.

To the north, the sandy, lime-rich soils of the more gently sloping land beneath Viandante del Cielo’s cellar and winemaking HQ proved to be the ideal home for Umbrian native varieties such as Ciliegiolo, Foglia Tonda, Pugnitello and Sanforte. And in a cool, sheltered site in the lee of the hilltop Convento, global star Chardonnay and local talent Grechetto form a perfect double-act.